Meta-note: this is more of a journal entry than the usual post here. I’ll experiment with the format and see if I like publishing such literal and figurative doodles.

Garbage collection is in the air. My friend Maxime is having issues with D’s garbage collector, and Martin Cracauer has a large patch to improve SBCL’s handling of conservative references. I started reviewing that patch today, and, after some discussion with Alastair Bridgewater, I feel like adding a mark-and-sweep component to SBCL’s GC might be easier than what the patch does, while achieving its goal of reducing the impact of conservative references. That lead to the whiteboarding episode below and a plan to replace the garbage collecting half of SBCL’s generational GC. But first, a summary of the current implementation. 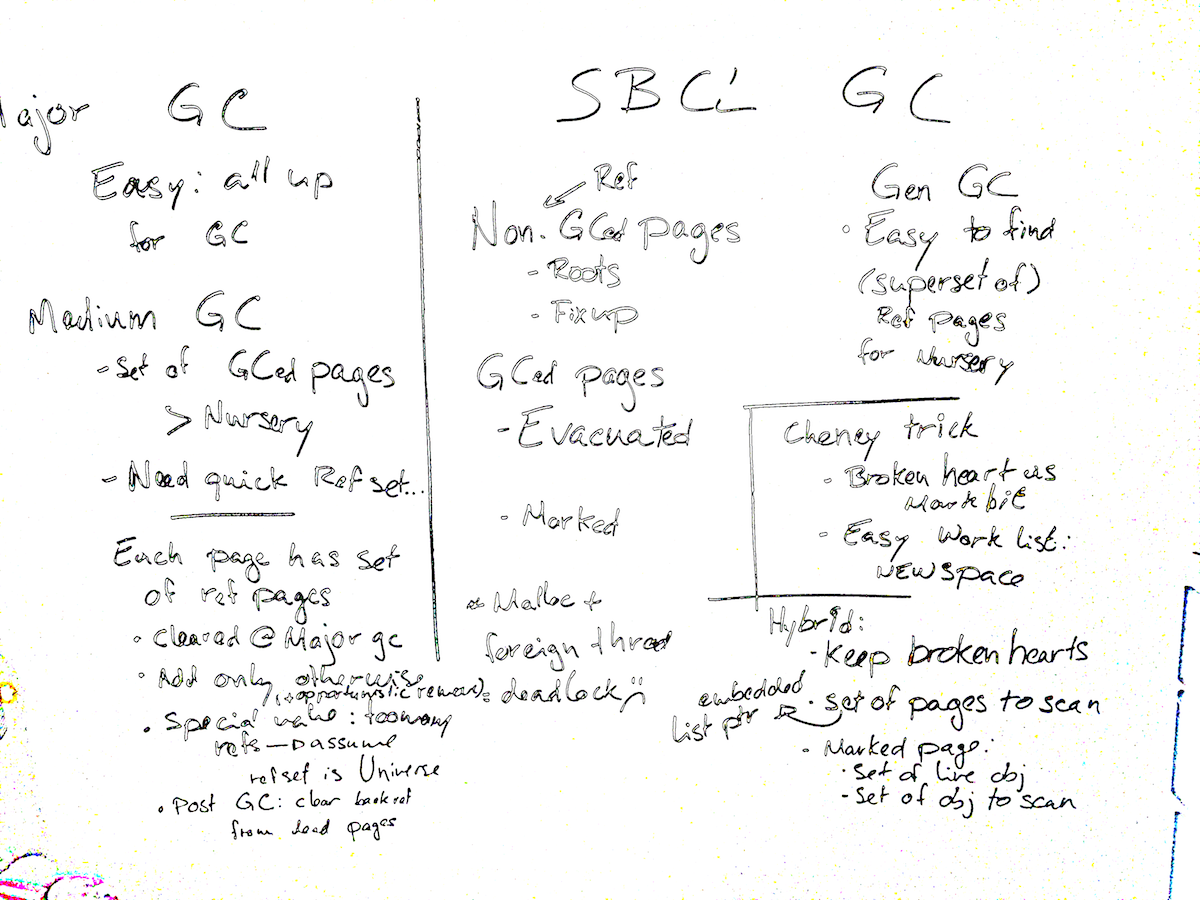 The present, and how we got here

CMUCL started out with a Cheney-style two-space collector. Two-space collectors free up space for more allocations by copying objects that might still be useful (that are reachable from “roots,” e.g., variables on the stack) from the old space to the new space. Cheney’s algorithm elegantly simplifies this task by storing bookkeeping information in the data itself. When we copy an object to the new space (because it is reachable), we want to make sure that all other references to that object are also replaced with references to the copy. Cheney’s solution to that desideratum is obvious: overwrite the old object with a broken heart (forwarding pointer), a marker that

This adds a constraint that heap-allocated objects can never be smaller than a broken heart, but they’re usually one or two words (two in SBCL’s case) so the constraint is rarely binding.

When the garbage collector traverses the roots (the stack, for example) and finds a pointer, the code only has to dereference that pointer to determine if the objects it points to has been moved. If so, the GC replaces the root pointer with a pointer to the copy in the new space. Otherwise, the GC copies the object to the new space, repoints to that copy, and overwrites the old object with a broken heart.

We also need to traverse objects recursively: when we find that an object is live and copy it to the new space, we must also make sure that anything that objects points to is also preserved, and that any pointer in that object is updated with pointers to copies in the new space.

That’s a graph traversal, and the obvious implementation maintains a workset of objects to visit which, in the worst case, could include all the objects in old space. The good news is we don’t have to worry about objects re-entering that workset: we always overwrite objects (in old space) with a broken heart when we visit them for the first time.

Some SBCL platforms still use this two-space collector, but it doesn’t scale very well to large heaps (throughput is usually fine, but we waste a lot of space and GC pauses can be long). The generational conservative garbage collector (GENCGC, GENGC on precise/non-conservative platforms) is a hack on top of that Cheney GC.

The GC is “generational” because most passes only collect garbage from a small fraction of the heap, and “conservative” because we have to deal with values that may or may not be pointers (e.g., we don’t always know if the value in a register is a Lisp reference or just a machine integer) by considering some objects as live (not up for collection) while pinning them at their current address.

The runtime uses mprotect to record writes to the heap, except for the nursery (newly allocated objects) where we expect most writes to land. The heap is partitioned in pages, and the first write to a page after a GC triggers a protection fault; the signal handler marks that page as mutated and changes the protection to allow writes.

When a GC is triggered, we usually want to collect only the nursery, i.e., only objects that were allocated after the previous GC pass. GEN(C)GC adapts Cheney to this use case by building the set of all pages that might have been mutated to point somewhere in the nursery (thanks to the mprotect write barrier) and scanning them for roots, like the stack in Cheney GC. The default GENGC configuration has 7 generations and we extend this scheme by flagging pages with pointers to younger generations (newer objects), without noting what these generations might be.

Pinned objects are also handled by abusing the root set: pages that contain at least one pinned object don’t undergo garbage collection and are directly scanned for pointers, like the stack in Cheney GC.

Instead of having two heaps, an old space and a new space, we now have a lot of pages, and each page belongs to a generation. When we want to collect a given generation, pages in that generation form the old space, and pages allocated during GC the new space. This means that we lose the simplicity of Cheney’s new-space-is-the-workset trick: the new space isn’t contiguous, so a single to-scan pointer doesn’t cut it anymore! GENGC works around that by scanning the page table, but it’s not pretty and I really don’t know if Cheney is a good fit anymore.

GENCGC’s approach to pinned objects is stupid. If a page has no reference except for one conservative pointer, the whole page is considered live and scanned for references.

Martin’s solution is to allocate additional temporary metadata only for pinned pages and track the pinned status of individual objects. When the GC encounters a pointer to a page with pinned objects, it checks if it’s a pointer to a pinned object. If so, the pointee is left in place. Otherwise, it’s copied normally.

The patch has code to mark objects as live (pinned) and to overwrite objects once they have been copied. Basically, it is half of a mark-and-sweep garbage collector. The main difference is that the set of pinned objects doesn’t grow (being pinned isn’t a contagious property), so we don’t need a worklist for pinned objects. However, I already noted that I’m not convinced the worklist hack in GENGC is a good idea.

Instead of marking pages as containing pinned objects, I feel it may be simpler to collect some pages by copying, and others by marking. Any pinned page would have the “mark” GC policy, while pages that likely contain few live objects (e.g., the nursery and pages with a lot of unused memory) would be collected by copying. This too would avoid the issue with considering whole pages as live when pinned, and I think that having the choice of copying or marking at a page granularity will be simpler than toggling at the level of individual object.

Each “mark” page now has two (bit)sets, one for live objects and another for live objects that have already been scanned. We can maintain a worklist at the page granularity with an embedded linked list: whenever a “mark” page gains a new live object and it’s not already in the worklist, that page is enqueued for scanning.

Instead of emulating Cheney’s trick by looking for newly allocated pages in our page table, we can add pages in new space to the worklist whenever they become full.

Finally, at the end of the pass, we traverse all “mark” pages and clear dead objects.

That’s pretty simple (arguably simpler than the current implementation!), and shouldn’t involve too many changes to the rest of the code. Mostly, I’d have to adapt the weak pointer machinery to stop assuming that it can use forwarding pointers to determine when objects have been marked as live.

However, we might lose the ability to run medium GCs, to collect more than the nursery but less than the whole heap. If we only want to GC the nursery, the mprotect write barrier gives us all the information we need to find references from the rest of the heap to the nursery. If we wish to collect the whole heap, we only have to consider stacks and some statically allocated space as roots.

For medium GCs, e.g., collect only generations 1-4 out of 7, GENGC exploits the way that garbage collection (almost) always copies to easily track pages with pointers to younger generations. It’s coarse, but usually acceptable thanks to the copying. I don’t know that it would work as well if the default is to only copy the nursery. Moreover, if we have a hybrid GC, it probably makes sense to focus copying on pages that are mostly empty, regardless of their age. If we do want medium GCs, we might have to track, for each page, the set of pages that point there. This set can include false positives, so it’s probably easiest to clear it before major GCs, and otherwise only add to that set (removing pages that were emptied by a GC pass sounds reasonable). I also expect that some pages will have many refererrers; I’m thinking we might use a distinguished value to mean “referred by every pages” and not consider them for medium GC.

Martin’s patch clearly addresses an important weakness in SBCL’s garbage collector. If I can’t make good progress on the hybrid GC soon, I’ll make sure the patch is cleaned up for master, hopefully by Thanksgiving.